The Raven Rock Ramble bicycle ride was created in 2002 to promote awareness of importance of organ donation and has grown into one of the preimer cycling events in the Research Triange Park area of North Carolina. It is the most popular ride in North Carolina based on the metric of how fast the event fills up when registration opens. Its founder, David Cole, is a kidney transplant recipient and ran the event for 20 years.

Raven Rock Ramble is also a 501(c)(3) public charity. The charity was organized when David announced he was stepping down from directing the event, such that the RRR event would have a rotating team to organize it. The charity has a board of directors which are the lead volunteers for the RRR event. The IRS tax ID is #85-0768119.

Each year, the Board of Directors will select what charity(s) will be the recepient of excess proceeds from the RRR event. For 2022 that charity continues to be the UNC Kidney Center.

The organizing documents for Raven Rock Ramble are at this location.

Raven Rock Ramble is an all volunteer organization with no paid staff.

You may email us at RRRsupport@ravenrockramble.org

The address of the charity is:


I started cycling in earnest 1987, shortly after a volleyball-induced knee injury took me out of running. I started riding in local group rides and centuries and developed decent strength and speed over time, such that by 1997 I set a new personal record in the Tour de Moore, finishing the 102.4 miles in under 4:30. Shortly thereafter a routine physical exam detected red blood cells and protein in my urine. One test led to another, and a kidney biopsy confirmed that I had a condition known as IgA nephropathy. From there began a slow physical decline, with the most immediate symptom being leg cramps. By the summer of 2000 it was clear that I would be needing a transplant, and by November 2000 I was sufficiently anemic that I got a prescription for EPO (the blood-doping drug of choice on the Tour de France - I can testify that it's really good stuff!).

My sister Laura agreed to be my donor, and we underwent surgery on March 7, 2001, just before I otherwise would have had to have started dialysis. I had some of the ups and downs associated with transplants (rejection, infection, etc), but by Memorial Day weekend I was back on my bike and managed an 8-mile ride.

I never expected I'd recover my speed and conditioning so quickly. I was riding metric centuries by July and full centuries by September, and without the first quiver of leg cramps. I began to remember why I enjoyed cycling so much, and would ride for the simple joy of feeling my body move and the bike respond. God, it's great!

The average transplant lasts only 10 years. I've already had 21 and am hoping for more, but I realize my time to enjoy cycling may be limited. My response is to make the most of it, ride when I can, and savor every moment. I encourage, indeed urge, you to do the same.

Competing in 2006 US Transplant Games 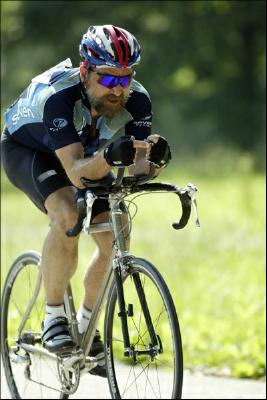 My sister and donor, Laura Long 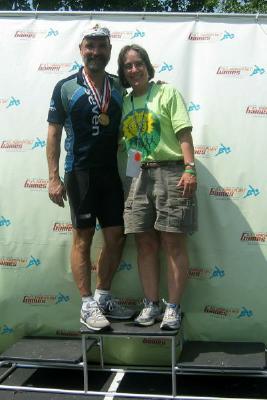 The 2023 Raven Rock Ramble Board of Directors are: